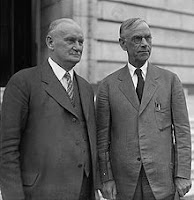 It doesn't seem like that long ago when I stood on a football field watching the play move away from me, towards the other side of the field, when I got whacked on the side of the head, crumpling me to the ground (yes-you get whacked hard enough you do actually see stars). For me, that was a lesson quickly and forcefully learned. Ever after-wards I kept my eyes open, all around, on the football field.

I've tried to extend the lesson to the capital markets. Today, investors are focused on the U.S. economic recovery and Europe's debt problems. Markets seem to get a nice boost from surprisingly good results from one or two technology companies. But sneaking up behind us are currency concerns. And they could crumple this market.

Japan has intervened to stop the meteoric rise of the yen. Geithner continually admonishes the Chinese for holding down the value of the Yuan. The U.S. talks strong dollar but clearly prefers a weak currency. The Fed obviously gives this considerable weight.

When a currency drops, it, in effect, puts its goods and services on sale on world markets. I live near a circle where catty-corner to each other are competing gas stations. All one has to do is lower price 2 cents on regular gas below the other station, and it has lines at its pumps.

In difficult economic times, currency devaluation enables a country to export its way out of recession. It is part of a protectionist "beggar thy neighbor" policy.

The scary part is that there is a tipping point when countries retaliate. This played out in the 1930s with the passage of the Smoot-Hawley tariff.

As they used to say on Hill Street Blues, "... be careful out there."
Posted by Robert Wasilewski at 7:51 AM