I Watched So You Didn't Have to 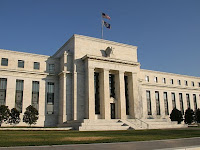 I tuned into CNBC yesterday at around 2 pm to watch the commentary up until the time of the FOMC announcement. As usual, the statement released by the FOMC was carefully scrutinized and opined upon.

Bill Gross, founder of bond giant PIMCO, argued that implementation of Quantitative Easing 1 (QE1) turned the stock market around and that the market stalled when QE1 was halted. This, understandably, got commentators foaming at the mouth and diligently searching for anything that could be read to imply that the Fed was ready to do QE2. Cramer, of course, did his schtick about cruise ships and Queen Mary and Carnival cruise line etc. -I wasn't really sure what he was saying as he hopped all over the set waving his hands and biting the head of a foam bull.

This is what they found in the statement:

"The Committee will continue to monitor the economic outlook and financial developments and is prepared to provide additional accommodation if needed to support the economic recovery and to return inflation, over time, to levels consistent with its mandate." My emphasis.

Commentators argued that this opened the door for QE2 and that it is imminent. The stock market , as usual, gyrated as investors tried to interpret implications for policy.

Sometimes I think that Erin Burnett is the only one on the show who has any economic sense. She kept trying to ask people whether maybe the Fed is hoping that they don't have to use QE2 and continue to flood the system with money. This fell on deaf ears. Everyone was hoping for QE2 as soon as possible and damn the long-run inflation consequences.

Do you think bringing down long-term interest rates by inflating the economy is a good idea?
Posted by Robert Wasilewski at 6:27 AM