An annuity worth looking at (part 2)

In the last post we looked at the basics of the longevity annuity. Simply, give an insurance company money today and at a specified time in the future it pays you until you die. It is like Social Security - a simple product that avoids the number 1 fear of retirees - running out of money.

The longevity annuity can be held in an IRA up to $130,000 and reduce required minimum distributions at age 70 and a half.

So, although I am against insurance products that are used as investment products (which includes most annuities) this is one that can be a good fit for many investors.

The last time we looked at 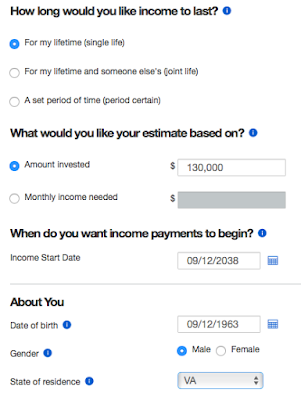 To be clear the investor would prefer to have a portfolio that grows at  8.88%/year to reach $705,900 20 years from now versus a contract that pays $28,236/year simply because the portfolio is available for heirs, provides more choices etc.

Still the annuity is a good fit for some. One important consideration is that it can free up assets to take more risk and thereby generate a higher return over the longer term.

Posted by Robert Wasilewski at 9:50 AM 0 comments

An annuity worth looking at (part 1)

Let me say at the outset that I am not a fan of annuities. I've seen too many that are impossible to understand even by those who sell them, involve egregious commissions and do not deliver what customers expect.

That said, there is one that I present to clients that is worth looking at. It can enable an investor to take more risk by increasing the allocation to stocks and at the same time reduce required minimum distributions at the age of 70 and a half. It is the "longevity annuity". 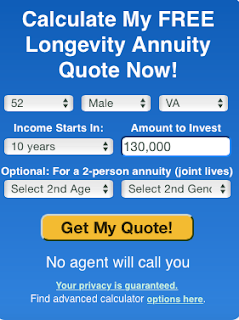 Here is a simple calculator provided online by immediate annuities that gives a simple example. You see I assumed 52 years of age, payout to start in 10 years, and a payment amount today of $130,000.

Hit the "Get My Quote" button and you find that the payout is, on average, $979/month.

You may be wondering why I chose $130,000. Simply this is the amount you can hold in an IRA and use to reduce required minimum distributions at age 70 and one half. Clearly those who are very risk averse and afraid of stocks can invest much more in this type of annuity.

So basically, this is very similar to social security and as such it enables you to take more risk, i.e. allocate more to stocks ( the third bucket for those using a bucket approach).

The usual caveats occur: check out the credit quality of the insurance company, look into insurance against bankruptcy provided by the state etc. As usual diversification may be in order depending on the commitment.

The next post will look at another example and look at a bit of basic math.
Posted by Robert Wasilewski at 8:53 AM 0 comments

Back in 2013 I sold a house, got a nice check at settlement and had to consider how to invest it. It was part of downsizing and the important objective was to generate income.

I looked at 3 possibilities: an annuity, the 10 year Treasury note, and dividend stocks.

The annuity paid about 4.5% but you lost control of the assets. For me, that was a non-starter. To be given serious consideration the yield would have had to been considerably higher.

The 10 year Treasury Note yielded 1.83%. It would pay a constant interest payment every 6 months for 10 years. The yield was considerably below the Fed's target rate of inflation of 2% and yields were widely expected to increase. An increase in yield would drive the price down, which did in fact happen - today it yields 2.84%. If that 10 year Treasury Note had been bought and needed to be sold today it would realize a capital loss.

The 3rd possibility was much more intriguing given the goal of generating income. At the time there were many really good stocks with yields of greater than 3%. By "good" I mean stocks that had a long history of increasing their dividend, had a low payout ratio (at least less than 60% of earnings), and a reasonable P/E ratio relative to the rest of the market.

My thinking 5 years ago was to generate a nice income and I wasn't really concerned with the price. I considered it like Social Security or even the annuity - nobody worries about the principle value fluctuating because of the market for these 2. What is of concern is the cash flow or income generated. The risk is that the dividend is reduced or eliminated.

Thus, a big concern was to properly diversify. For example, look at Pfizer and Merck but only choose one.

Lest readers think I cherry picked, I chose Kimberly Clark just because it was the most recent dividend payer I hold. In fact, I have a couple of holdings that have more than doubled. But, again, the price increase is gravy, the dividend is the objective.

And, if I get hit by a truck (actually did in 2017 via bladder cancer but that's a whole different post!) my wife and kids will be glad I didn't hand the money over to an insurance company to buy an annuity.

Posted by Robert Wasilewski at 11:53 AM 0 comments

Be Careful With Statistics

"This is what the stock-market indicator with the best track record is telling us.",

on MarketWatch.com, based on Ned Davis research arguing against those who believe that high "sideline cash" could lead to a strong upsurge in equities.

Let me say right off that I don't know where the market is going.  I believe that over the next 10 years stocks will do better than bonds and bonds will do better than cash equivalents. I believe that stocks could do a lot better given that the information age puts all kinds of information at the fingertips of very smart, creative, energetic people around the world. But...I could be wrong. Furthermore. I will be the first to stand up and admit that Hulbert is a lot smarter than me and I enjoy reading his posts.

Still, I think one needs to be careful with time series data on stock investing and this post by Hulbert is a prime example.

As an individual my investment choices were actively managed mutual funds that charged a lot expense wise or individual stocks at a high commission. If I wanted to buy or sell I had to talk to a broker who inevitably tried to up sell me by pressuring me into high commission product. To see how my stocks did the previous day I went to the mailbox and got the newspaper.

Today of course I can buy ETFs with the push of a button that track markets around the world. Today we live in a defined contribution world. Today, according to the Census Bureau, 79% of Americans have access to a 401 (k) at work. Today the small investor can easily and economically  invest in the overall market, a choice that has been shown to outperform most active managers over the longer term.

The point here is that using time series data from the 1950s on up even to the 1990s compared to today is comparing apples and oranges. In effect, arguing for the "reversion to the mean" maybe misleading as  the mean could be changing significantly over the period examined.

So maybe you say "no harm no foul", the data just needs to be taken with a grain of salt. Unfortunately I think the harm is greater in the following sense. Many investors can be persuaded by slick talking advisors using this kind of information to alter their investment approach. Using terms like "mean reversion", R-squared, and performance by "quintiles" gives the report seemingly expert opinion.


Posted by Robert Wasilewski at 11:24 AM 0 comments