Can You Retire Early?

Here's a neat little chart from businessinsider "How close am I to early retirement"? Just find your income level and then the difference between your spending and saving. The answer as shown in the chart is how long it takes to build a next egg you can retire on by taking the magical 4%/year. Do this and you won't run out of money.

Simple? Yes, but useful as a general guide.

The problem is tricky as I've written several times on this blog. You've got inflation, market performance, how long you will live, medical costs and all sorts of unknowns. Some people take more comfort in getting complex analyses which produce Monte Carlo scenarios etc. To me simple is better. But it is very important to revisit the issue every couple of years at a minimum to see where you stand.

Some people target a number. For example they might have $1 million as the value of their nest egg at which they can retire. A problem here is that the number will be hit when the market is at a high point. I had a distraught individual who came to me after he had retired in 2000 and then went through the dot.com bust and had to go back to work. He then retired after the market hit a  record high in 2007 and then experienced the 2008 down 37% market. Needless to say he was at wit's end!

But back at the chart, what I really like is the out front emphasis on income and sending. The gap is what is key and it is important to not get lost in the weeds with all the other moving parts!
Posted by Robert Wasilewski at 1:33 PM 0 comments

Ok, so you've listened to Bogle and Buffett, you've read Bernstein and Malkiel. Now you want to get started investing in low cost index Funds. You've got numerous accounts: 401(k)s, IRAs, taxable accounts etc. You've got capital gains to think about and a host of questions on how to get going.

My suggestion is to find a Registered Investment Advisor (RIA) you can work with. This is code for "who is an adherent of the low cost index Fund approach".  If you (1) have made trades and know what ticker symbols are etc., (2) can withstand volatility in your portfolio and (3) are willing to spend some time continuing to be educated on the investment process as it relates to creating a retirement
"nest egg", then you are likely a good candidate for hourly consultation or having the RIA invest for a short-term period to set the account up and then doing your own investing. From the start you save advisory fees of 1% to 2% as well as avoid high cost Funds that tend to underperform the market.

In my practice I do a session for $160. During the session we typically Skype and look at the investments, talk about goals, talk about how big the nest egg should be saved at various ages, how much should be saved, risk tolerance and Funds to be invested in. Sometimes we go over the process of rolling over 401(k)s, withdrawal strategies etc.

Many times this is enough to get the do-it-yourself investor headed in the right direction. Other times I manage assets for a short term period at a low rate of 0.4% per year. If for instance the account is $600,000, I charge $600 for the first 3 months. If at that point the client is ready to take over then that's it - no further charge. Typically, the client will schedule a session for $160 approximately 12 months later.

Some clients of course have me manage their assets on an ongoing basis. They have other things in their daily work life or even in retirement they would rather do than to be managing their assets.

Why an RIA? Good question. Because RIAs are fiduciaries and as such are required to tell you if they have conflicts of interest in regards to compensation. That is, do they get commissions from referring you to people or selling products? Many are like me and the only compensation they receive is what their clients pay them. This is the primary factor in determining that RIAs do what is in the clients' best interests!

Posted by Robert Wasilewski at 8:19 AM 0 comments

This from Yahoo Finance, "How Wall Street is trying to make sense of the stunning stock market rally"

Stock prices crashed as it became clear that Donald Trump would be elected the next President of the United States. And then they did a complete reversal to actually rally during the first trading day after the votes were counted.Just when you thought the stock market was starting to make sense, it goes ahead and does the exact opposite.The markets were supposed to get crushedAhead of Election Day, Wall Street’s stock market experts were in broad agreement that a surprise victory by Republican candidate Donald Trump would be met by a sharp sell-off, ranging somewhere between -3% to -15%. Yahoo Finance reported on this multiple times.

This is another example of the futility of trying to time the market. There also is some "recency bias" apparently going on. This is where investors give weight to what has happened in similar situations in the recent past. On this front not long ago investors saw the head fake from the Brexit situation whereby stocks dropped and then reversed sharply.
Market time at your own risk.
Posted by Robert Wasilewski at 9:26 AM 0 comments

Can you find a growth fund that will return 12% over the long term?

Debt elimination guru Dave Ramsey argues that people should eliminate all debt and then invest in a growth fund that returns 12%/year. By the rule of 72 money doubles every 72/12 = 6 years. Sweet!

I, with just about everyone who is familiar with Ramsey, admires his work on the debt side. He has helped thousands get out of and stay out of debt.

But his investment advice is misleading and potentially harmful. Finding a Fund that averages 12% over the long term is like trying to find the next triple crown winner. Good luck! And as he further recommends taking 8%/year out of your nest egg can lead to the outcome that is most feared by retirees - running out of money.

But the good thing about living in the internet age is that it is fairly easy in most instances to research claims or for that matter just about anything you are interested in. People do this in many areas but not so much in finance.

For example, Google "Large Company Stock Returns" and you'll come up with a link that shows the following table: 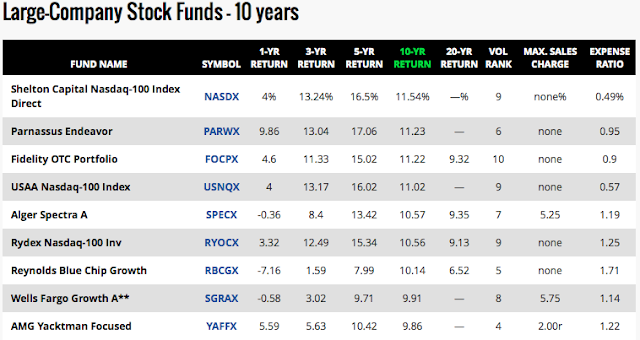 This table is reported by Kiplinger and the data comes from Morningstar. These Funds are the top performers out of tens of thousands of Funds.

Looking under the 10 year and 20 year columns you see no 12% s. As you do your research you'll find that Ramsey uses the non sensical arithmetic average whereas the appropriate average is a compound annual number.

But the idea here extends beyond Dave Ramsey and his investment advice. Suppose you want to know what Warren Buffet suggests as an investment approach for the average investor. Or, you have an annuity and, like most people including those who sell them, you can't make heads nor tails of it. Just go on a good search engine and look them up.

Doing the research ahead of meeting with professionals is especially useful because once the jargon starts flying the will weakens and when it comes to financial products people just give in. To hammer this home think of going in to meet with an attorney to discuss setting up a donor advised fund. If you are like most people you may be a bit intimidated in meeting with an attorney. Do a little research and this stress will be reduced and you'll be able to follow the pros and cons as presented and in the end be able to make a better decision. It is all a benefit of living in the information age.


Posted by Robert Wasilewski at 9:24 AM 2 comments