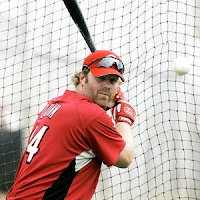 I love it when announcers say a player is due. For example, Adam Dunn, the prolific home run slugger of the Washington Nationals, has averaged a 4-bagger every 14 times at bat. Naturally then, if he goes 20 times at bat without a moonshot, the announcers will say he's "due" and viewers will edge a bit forward in their seats expecting this time at bat to be more likely than others to produce a shot over the wall.

This, of course, is "the gambler's fallacy" in disguise. The gambler sees 3 heads in a row and immediately announces that a tail is due and steps up to bet on a tail, as if the coin has a memory. The odds of a tail aren't, of course, affected by what came before just as Mr. Dunn's odds of hitting a home run aren't affected by the previous at bats.

In the world of investing, the gambler's fallacy causes investors to stay with losing positions too long. The voice in the back of their head says the stock is "due" to turn around. In fact, if they had a recent turn around situation, this can increase their perception that the odds of the stock going up have increased.

Awareness of "the gambler's fallacy" is a step in the right direction in improving investment performance. In fact, the best way to avoid the trap is to take a long-term perspective, invest in low cost index funds, and look at your portfolio less often. Instead, enjoy a ball game and root for Mr. Dunn and the Nats!
Posted by Robert Wasilewski at 9:15 AM