Is There a Limb Getting Ready to Break? 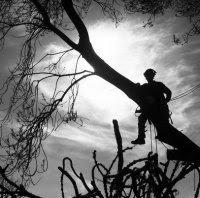 The investment pros have been wrong along with most everyone else, except maybe for the small investor, in predicting a rise in interest rates. The yield on the 10 year Treasury note has fallen to a 16 month low. Amid the pros continual tsk tsking, the small investor has continued to pile into bond funds. Although this extreme drop in rates could very well be a bubble and come back to severely punish the small investor, it has been a very rewarding move up to this point.
In my experience, when these kinds of moves take place, there is the potential for a big accident. Simply, when the pros believe a move in prices is a sure thing (i.e. a drop in bond prices), they bet heavily on it. Unlike you and me (hopefully), they don't just put their money on i-- they borrow to the hilt and put it into the pot. For example, Paulson bet heavily on the housing bubble and won - from a no name hedge fund manager he vaulted to guru du jour. The rest of the banking system made leveraged bets on mortgage backed securities and insuring various instruments - and the American tax payer lost big time. Long-Term Capital Management bet heavily on mean reversion for global spreads and lost--the Fed had to be called in to engineer a bailout.

Very likely there is a trader somewhere - in a hedge fund or in a bank - who has made a heavy leveraged bet on rising rates and who is bathed in sweat night after night praying for rates to rise. The limb is bending mightily. To say the least, if it does occur, the timing couldn't be worse. The Fed is out of ammunition, basically proclaiming this past week that the printing presses are going to remain wide open.

Just some thoughts.
Posted by Robert Wasilewski at 7:26 AM