Continuing with the Treasury auction results, going to the Econoday calendar at the Bloomberg site as described in Monday's post, we get the following comments on yesterday's Treasury note auction. This is the second leg of a three-part issuance, totaling in excess of $100 billion.

Highlights
Thin late August markets are making for soft Treasury auctions. Coverage for today's $36 billion 5-year auction was solid at 2.83 but the offering size was the smallest of the year at $36 billion. The auction shows a one basis point tail, posting a stop-out rate of 1.374 percent vs. a 1:00 bid of 1.365 percent. Buyside participation was respectable with non-dealers taking 57 percent of the auction, only slightly lower than the July auction. The Treasury closes out another heavy week of supply tomorrow with a $29 billion 7-year auction.

It looks like non-competitive, non-dealer buying was a bit heavier, indicating that individuals are stretching a bit for yield. Still, at 1.375% yield, the after-tax real yield (subtracting for inflation) is negative. This issue came with a coupon of 1.25% and, therefore, because it had a yield of 1.3774%, was sold at a discount. This is now the so-called "on-the-run" 5-year Treasury note. Using the same drop down list as for the calendar and clicking on "Rates & Bonds" gets you to a complete list of on-the-run issue 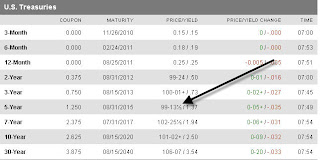 s and what is called the "Treasury Yield Curve": Click Image to Enlarge. Note the discounted price of the new 5-year and its yield-to-maturity of 1.37%.
Posted by Robert Wasilewski at 7:39 AM