Favorite Blog of the Week 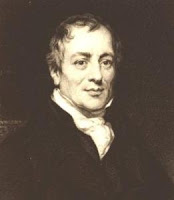 My favorite blog of the week was the post of the TED talk at Biz of Life's site by Matt Ridley. This talk covered a lot of material I go over each semester with my Econ 101 students. They, along with most Americans, have never given any thought to how wealthy they are or how the U.S. became so wealthy over such a short period of time. Most have never heard of David Ricardo and the theory of comparative advantage. Most have never thought about the benefits of exchange.

David Ricardo is interesting in that he argued against his own self interests (very rare in economics). He argued against the Corn Laws which in turn held up the value of land and thereby protected wealthy landowners--of which he was one. Considered by many to be the greatest economic theorist of all time, he actually had no formal training in economics. The story is that he was at a seaside resort, was bored, and happened to pick up a copy of Adam Smith's Wealth of Nations. The joke among students ever since has been that Ricardo began reading economics because he was bored and ended up boring generations of economic students with his theories!

The TED talk covers the benefits of the exchange of ideas, but there is also a downside. Simply mentioning the possibility of a "double dip" can morph into a serious concern and has the potential of self-realization as the idea spreads, and it scares people.
Posted by Robert Wasilewski at 7:27 AM