What is a Long/Short Fund? 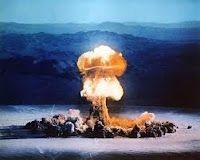 I think it was President Reagan who popularized the phrase "Here we go again!"  After a brief respite, Main Street is once again trying to fathom the workings of Wall Street.  $2 billion lost hedging....but hedging is supposed to reduce risk, right?  More head scratching ensues as Dimon explains an "egregious mistake."

Part of the disconnect is in the word "hedging."  To Wall Street, taking $2 billion to the race track and putting it on a long shot is hedging.  I don't think Main Street quite looks at it this way.

I was introduced to hedge funds at a luncheon in a hoity toity Washington D.C. restaurant by a Dean Witter institutional broker more years ago than I want to remember.  He explained he had a manager using a long/short approach.  The manager analyzed the stocks in the S&P 500 by screening on cash flow metrics, P/E ratios, earnings growth rates - all the usual stuff.  This identified the 50 stocks most undervalued and the 50 stocks most overvalued.  With these in hand, the manager shorted the worst 50 (sold them even though he didn't own them) and with the proceeds bought the best 50.

The broker explained this produced the holy grail - no matter which way the market moved the long/short fund would produce a positive return.  Wow...give me the dessert menu.

I was at a presentation this past Saturday where various investment strategies were enumerated.  A phrase that kept popping up was "it works until it doesn't."  This comes to mind with the long/short hedge funds.  When you think about i,t there is no long/short hedge except in the mind of the broker and the manager.  What happens when the 50 stocks shorted outperform the 50 best stocks?  Oops! This is sort of an embarrassing question because it implies the fund manager might not be that astute.

I was presented with many synthetic derivative proposals by Bear Stearns in the mid 1990s.  I frankly didn't come close to understanding most of them.  I did understand that they were the most illiquid impossible-to-price instruments I had ever come across.  As I read about JP Morgan London buying a credit default swap index to hedge high-yield global bonds (with the craziness going on in Europe), I  remembered the garbage I used to have presented to me that gave me a headache.

The best part of this for me is watching Maria Bartoromo go apocalyptic on CNBC whenever a guest suggests that maybe Wall Street needs to stop this so-called hedging. T he fact of the matter is that banks are no longer banks as most people understand them and instead are gambling casinos.  Sadly this is what did in Freddie Mac and Fannie Mae and has the potential to bring down the banking system.
Posted by Robert Wasilewski at 4:06 PM