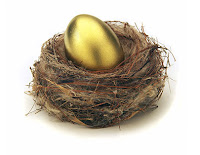 Seniors consistently say that running out of money is their greatest fear in retirement.  It's not surprising, then, that there has been considerable research on the appropriate nest egg paydown rate.  Bill Bengen set the ball rolling in this area when he published a series of papers in 1993 that looked at 30-year periods going back to 1926 (before the Great Depression) and analyzed payout rates.  He found that over the 38 thirty-year periods, a 4% paydown rate, adjusted for inflation, lasted for all but one 30-year period.

This was the genesis of the 4% paydown rule that is widely used today.  Further study raised the rate to 4.5%.

Clearly this is not an easy problem.  There are several important unknowns that raise their ugly heads-- including the rate of inflation, market returns, and how long a person will live.  Bengen assumed an asset allocation of 35% large cap stocks, 18% small-cap stocks, and 47% intermediate government bonds.

So what was the 30-year period that failed and why did it fail?  Surprisingly, it was the period when a person retired on 1/1/1969.  This is surprising because this period ended with the greatest bull market in the history of the stock market.  So, what was the culprit?  Inflation!

Bengen has revisited the payout problem in "How Much Is Enough?" in the May 2012 Financial Advisor magazine and examined additional periods.  In the exceptionally clear article, he furthered his research by comparing the first 12 years of 1969 to the period beginning on 1/1/2012.  This latter period, of course, has experienced 2 severe market downturns.  Bengen wanted to know if the 1/2000 was on a course for failure - a question facing many retirees today.  Furthermore, he suggested some steps for retirees in situations where the initial, crucial years of retirement are not very friendly in terms of the market and inflation.

In analyzing market performance, he found that 1969 produced a 7.6% average annualized portfolio return over the first 12 years compared to 5.4%  for the corresponding period beginning on 1/1/2000. Still, Bengen finds that the 2000 retiree is in much better shape because of inflation.  As the years  move along, the current withdrawal rate will be influenced by inflation.  Thus, in year 5, for example, the amount taken will depend on the prior 4 years' inflation.

His findings emphasize the importance of staying focused on inflation.  We have come through a period of very modest inflation which naturally tends to cause people to lose sight of its potential significance.  Furthermore, many observers foresee the possibility of a sharp pick-up in inflation sometime in the next several years due to the monetary policies designed to pull global markets out of a severe slowdown.  This is something that retirees need to keep on the radar screen.

Bengen points out that, if the retiree senses the possibility of a failure, he or she can either reduce spending or increase income.  He states,

I strongly urge anyone interested in this vital area for retirees and near-retirees to click the link above and read Bengen's article.  What I've given you here is a Cliffs Notes version.  The article, unlike many in financial planning magazines, is highly readable.


Posted by Robert Wasilewski at 8:21 AM