This data offers many insights for investors on longer term relationships, the interaction between asset classes, the value of diversification and so forth.

To begin with, DIY Investor wondered how a 70% S&P 500/30% Barclay's Aggregate Bond Index (BC AGG) portfolio performed over the period. Putting the data points in Excel and doing the appropriate weightings produced an average annualized return of 8.46%. This is an interesting result, but few people would have this weighting over a 20-year period, although given the Dalbar results for individual investors maybe they should have.

Anyways, DIY Investor considered a 40-year-old investor in 1991 with an allocation of 80% S&P 500 and 20% Barclay's Bond Index. DIY Investor further assumed that every 5 years the allocation was changed such that the equity portion was reduced by 5% and the bond portion was raised by 5%. Thus, in 1996, for example, the portfolio was weighted 75% stocks/25% bonds. By the time 2011 was reached, the 40-year-old was 60 years old and the allocation was a reasonable 60% stocks/40% bonds. The calculation under this assumption achieved a return of 9.25%, somewhat greater than the return reported above for the constant 70%/30% allocation. 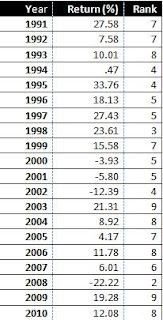 Next, DIY Investor became interested in how this very basic sector diversification stacked up relative to the 9 asset classes shown in Callan's Table. The table on the left shows the results on a yearly basis over the 20-year period.
It provided some diversification but still was highly volatile. On one occasion (when both the S&P 500 and the bond index were at the bottom of the performance list), the portfolio (which actually was 70% stocks and 30% bonds) ranked 9th overall out of 10 asset classes. It is also notable that the portfolio ranked 2nd in 2008 - actually a good year to rank 2nd as most investors would agree!

For the most part, the simple diversification did its job in keeping the portfolio away from the extremes and dampening overall volatility.

It did leave DIY Investor wondering how a further simplified diversification might affect the results. For example, how would adding international stocks to the mix via MSCI EAFE.

If DIY Investor had a bit more energy, he would do an analysis showing a formal rebalancing each year and maybe attempt an analysis whereby the 40-year-old starts with $200,000, say, and adds $15,000/year. As we know, sequence of returns plays an important role.
Posted by Robert Wasilewski at 10:59 PM