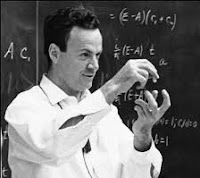 Richard Feynman was a great teacher and arguably the second greatest U.S. physicist, behind none other than Albert Einstein, and also a great teacher.  He believed that, if you couldn't explain a concept in physics to a layman, then you didn't understand the concept.  Something to keep in mind the next time you meet with your financial advisor.

I have been a long-time Feynman fan and have read a number of books about him and his lectures.  I highly recommend Genius by Gleick and his own Six Easy Pieces - even if you aren't interested in physics.  You'll especially like the part where he explains that people believe they are answering a question when actually they aren't.  For example, saying "because it's slippery" doesn't explain why our feet fly out from under us when we step on ice.

Being a fan, you can understand that I was pleased to come across a commencement address by Feynman on Biz of Life's site entitled "Cargo Cult Science."

The message of this piece struck home because I've recently been reading a number of research pieces in financial planning that don't seem to me to be especially rigorous.

It is a fact of life that studying economics and finance has to rely a lot on history.  Sadly, we can't go into the lab and keep everything the same and see what happens, for example, after 2003 if the Fed doesn't lower interest rates to 1% and ignite a housing market boom.  Sadly, we rely very heavily on one historical episode - the 1930s - (which was very different from our world today) to make or support current policy.  In  financial planning, we look at failure rates in withdrawing funds from a portfolio when yields were a lot higher and the economy was at a younger stage and was a manufacturing behemoth.  And from this we get probabilities.

To be clear, the analysis is valuable but it doesn't give probabilities.  This is my point.

An example in sports is the way announcers or analysts sometimes talk about teams.  They'll say, for example, that (fill in the blank with a team) has only won a seventh game of a World Series two times in the last 50 years.  What does this tell us?   Can we derive a probability from this?  Over a 50-year period you obviously have very different teams.  It is hard for me to see this as anything other than a nonsensical observation.  It does, however, get fans riled up.

I'm convinced that the failure to appreciate this observation in finance is behind the ongoing failures of so-called "value-at-risk" models.  These models take historical data (from a world much different from the present) and derive probabilities.  Then they are shocked that the correlations don't hold up!

Understanding Feyman's message goes a long way in understanding how to interpret academic research, expert opinion, and, in particular, the ethical way to present and carry out that research.
Posted by Robert Wasilewski at 3:52 PM