CNBC and the Fed Meeting 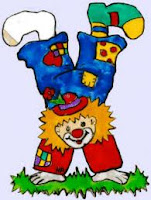 I've got two questions:  First, do the commentators on CNBC have any idea how clownish they look?  Yesterday, as the market rose, then plummeted on the Fed announcement and finally ended up sharply, the commentators, guests, as well as the regular reporters, had great after-the-fact explanations at each stage-as they do at the end of each day. They parade on - one right after the other - first explaining that the Fed didn't tell markets what they wanted to hear as prices went down and then oops! prices are rising; so guests and reporters reparsed the Fed statement and found that  the Fed said exactly what the market  wanted to hear.

Secondly, do the reporters realize how ridiculous they look in practically begging Bernanke to take actions to push stock prices higher?  The incessant pleading in the hope that he will announce that rates will stay low for a protracted period, that he will announce QE 3, that he will change the maturity distribution of the Fed's Treasury portfolio, that the committee will lower the rate on excess reserves, etc. repeated over and over is akin to beggars on the streets of London asking for crumbs from the passersby.  Sadly, this has turned into the step child of the deficit crisis.

Since 1994, when Greenspan actually surprised Wall Street with a rate increase, the likes of Goldman Sachs, Bank of America, and the late Lehman Brothers have fattened themselves on the free ride given by the Fed in announcing its policy and spelling out its intentions.  By announcing its policy and now actually holding periodic press conferences, in case CNBC et. al, are too stupid to understand it, they have enabled the Street to exploit carry trades in which they sweep in essentially risk-free profits by borrowing practically free money and lending further out the yield curve at higher rates.  The bottom line, sadly, is that  the Federal Reserve by its actions (in the guise of transparency)  has become totally impotent - a lackey for the banking system.  Short-term rates have been close to zero and two massive attempts at monetizing the debt (let's call it what it really is), and still we are scratching our heads and wondering if we're facing a "double dip."

As for CNBC - at least it's great entertainment.

Posted by Robert Wasilewski at 7:46 AM