The question of whether an investor should index at least part of his or her investment assets or go the actively managed route can be approached from a number of different angles. You can look at performance numbers, the upfront costs and hidden costs, impact on taxable accounts of excessive trading on the part of actively managed accounts, and on and on.

To DIY Investor, any way you look at it, indexing makes the most sense, especially over the long term. Especially today, when you can get index exchange traded funds at such a low cost and in many different areas of the market.

DIY Investor's interpretation of the data is that, if you feel lucky, then go with active management. Essentially it boils down to trying to draw one of the 20 red marbles out of 100 marbles in the fish bowl. All I can say is "good luck". Economists have shown that most people are "risk averse." To DIY Investor this means that, even if people had a 50% chance of not coming up with a red marble, when it comes to their retirement assets, they would choose indexing.

But the active management community came up with an excellent ploy several years ago. They labeled the indexing approach as "passive management" and played on the idea that "passive" has a negative connotation. After all, they said, hard work, analysis, and brains will pay off in the investment world like it does elsewhere. Passive investing accepts the mediocre. Touche! My guess is that pitch has cost investors more in total than even the highly-publicized Ponzi schemes in recent years. And it has enriched Wall Street. Managers who underperform on an ongoing basis routinely receive 7 figure payouts. It led Fred Schwed to famously ask, "Where are the customers yachts?"

DIY Investor calls indexing "evidence based investing" for the simple reason that the evidence points to its superiority for most investors.

But when it is boiled down to the bottom line, what is the best evidence? What is the question that people should ask the advisor who directs them to actively managed funds or who claims they can pick stocks or even time the market?

To DIY Investor, the very best evidence is to ask what professionals do who are responsible for managing humongous pools of assets.

Bill Schultheis provides indexing information on some of the nation's largest pension funds in his recent book The New Coffee House Investor. 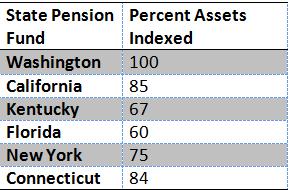 The important point here is to understand that these funds have large staffs of well-compensated analysts from the best business schools in the nation. What message does this send if they are indexing the bulk of their assets?

In a previous life, DIY Investor was an advisor at one of the nation's largest union pension plans. We picked managers with the best track records, etc. and told them to go out and beat the S&P 500. When the dust cleared, and the longer term results were tallied up, they pretty much matched the market. It didn't take an Einstein to recommend to the Trustees that the Plan index and achieve the same result with a lower cost.

So, when you meet an advisor who claims he or she can beat the market and wants to charge you 1% to 2% of assets. ask him or her why the large pension funds index form the bulk of their assets. While you're at it, you may also want to ask the advisor why Warren Buffet says that indexing makes sense for most investors.
Posted by Robert Wasilewski at 8:24 AM