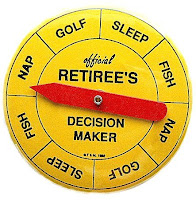 Many things in financial planning and investing appear upside down. This, of course, is what makes it interesting. When is the best time to buy? According to the famous and wildly successful Baron von Rothschild, it's when there is "...blood in the streets." Not to digress too much (I apologize for trekking afield but this has stuck in my craw for a long time - the Rothschilds didn't take a lot of risk), but his most well-known coup was trading on the inside information of Napoleon's defeat provided by his swift carrier pigeons not on contrary trading. But, still, the original point has been the basis of contrarian investing over the years.

At the other end of the spectrum, investors are told to lighten up when all the news is positive and averages are hitting new highs.

This upside-down idea applies to the question of when to retire, as well. The mistake a lot of people make is to feel comfortable in retiring after a push up in the market has produced the magic "number." They then retire, and watch in horror as the value of their portfolio drops in a down market and the "number" fades into oblivion. On the other hand, when news is negative, as it is today, and markets have dropped, people are fearful of retiring. But, if the financial plan works today, after the market has experienced a meaningful downturn (and stock prices are at more reasonable levels), it is very likely a good time to retire. As long as a solid strategy is in place to ensure that cash flow needs can be met over the next couple of years without having to liquidate stocks and bonds in down markets, retirees should be able to weather the storm.

Having said all this, it goes without saying that there are no guarantees. Talk is increasing that we are on the verge of another period like the 1930s, that the next shoe to drop is a serious deflation, and that our monetary and fiscal policies are failing us. This view can't be dismissed; but I, along with most observers, still see this as a low-probability event.

It has to be said , of course, that if we are moving into a 1930s type period, then retirement is a bad idea. Work as long as you can.

What do you think?
Posted by Robert Wasilewski at 7:26 AM

Labels: When to retire