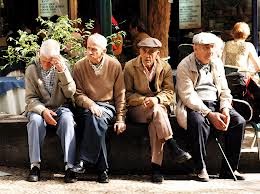 Would you say that U.S. Treasury Notes are pretty safe investments?  My guess is you would.  Most people would argue they are a lot less risky than, say, the stock market.

Suppose we go back 10 years and look at the guy all invested in 10-year Treasuries.  Investment advisors run into this guy all the time.

It is 7/1/2004, and Riskfree Randy sidles up, swells up to twice his normal size, and proclaims he has  investment assets of $500,000 invested in 10-year Treasury notes paying 4.57%.  The notes pay $22,850 and, with Social Security, he is in great shape, he tells you.  Smugly, he lets you know that he doesn't need the riskiness of stocks--he is set for a nice retirement.

Say hi to Randy as you leave Walmart!

But, as they say in the infomercials, there's even more.  Over the period, stocks have more than doubled!  Double ouch!

This, of course, isn't the worse case.  Talk to those who avoided risk by rolling over CDs.

Posted by Robert Wasilewski at 11:18 AM