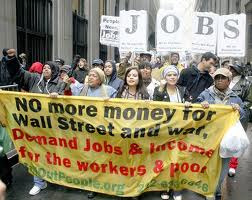 Leaders of the protest seek others who desperately want  to be part of something - anything.  They seek those who have spent their life on the outside and who feel they have been wronged by the economic system.  Easy to find in an economy with persistent unemployment and underemployment.  The mob grows and they chant inane sayings about the economy and wealth - and the ever-present anarchists who thrive on shock value incite the mob.  Shock value and economic understanding don't go hand in hand. Mobs are more about wealth destruction than wealth creation.

Some are frustrated because they have gotten college degrees that they believed were the key to a high paying job and now are saddled with a large student loan and have no job or a low-paying job.  Others bought houses they couldn't afford and have slowly seen their dreams dissipate.  Many had jobs they thought would afford them a productive life that were swept away to other countries.  These are the discontented that the protests will gather up as it spreads.

To be sure, there are economic injustices and policies to protest. Money controls politics to too great an extent.  Our leaders have enacted harmful economic policies.  Economists have led us down the wrong road with the never-ending prescription extolling the virtues of free trade.  The tax system is out of whack.  Wars are fought for economic purposes and their real purpose is obfuscated.  There is plenty to protest.

Part of the problem - which the protestors will never get - is that the country has too many "safety nets."  It is to easy to get part of what is produced without contributing to the productive process.

There also is much to celebrate.  In our system, people are free to choose their own path.  You can pursue wealth - or not.  Your choice.  One thing is for sure.  As long as people can keep a goodly part of what they earn, the best and brightest among us (in the U.S. and around the planet) will work hard to try and figure out what we want.  They will think hard and work hard to produce the music, clothes, computers, and autos we want.  They will work hard to cure our diseases and seek innovative ways to educate us.  As I've said before on this blog, IMHO, we should feel like kings and embrace the opportunities afforded us.

The economy they protest creates the laptops and the cell phones and even the pizza they eat as they protest.  Something to think about as the protest spreads is whether shutting down bridges is the best way to go about getting desired changes.  That is, once the desired changes have been figured out.
Posted by Robert Wasilewski at 8:28 AM