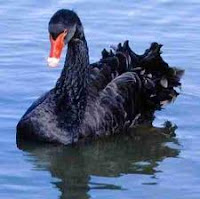 "Those who do not learn from history are doomed to repeat it." - George Santayana

Mention black swans and you get investors' attention.  These are the rare events that destroy portfolios.  Unfortunately, they are not as rare as commonly thought.  Two have occurred in the last 10 years - the dot.com bust and the housing crisis.  The term, of course, was popularized by hedge fund trader Nassim Taleb in what was said to be the most widely read book on Wall Street a few years ago - The Black Swan.  The book is a must-read for DIY investors.  It is one of those books where you'll feel smarter after you've read it.

In another must-read, The Investor's Manifesto, William Bernstein says, "...the only black swans are the history that investors have not read."  This is his way of saying that extreme financial events won't be a surprise to those who know their financial history.  Bernstein cites the Great Depression during which stocks lost 90% of their value.  Interestingly, Taleb's investment approach is to stay highly liquid, hide in the bushes, and be ready to pounce when the black swan arrives.  It's an approach that has worked for him.

Bernstein uses this background to support his point that using historical returns can be costly.  In essence, it is looking in the rear view mirror - something investors do naturally.  An example he uses is highly relevant to today and worth thinking about for the DIY investor, especially those piling into bonds today.

At the Treasury auction of 9/30/81, 20-year Treasury bonds were auctioned to yield 15.78%.  Over the 5 years up to that point, inflation averaged 10.11%!  As I recall, this was the weakest auction in terms of bidding interest in the history of the U.S. Treasury - this despite a "real" return in excess of 5%!  At the time Fed Chairman Volcker had already tightened money drammatically.  Over the ensuing 5 years, inflation dropped to 3.42%.

Over the 20 years following this auction, the real return (after inflation) on the long-term Treasury bond was 8.66%.

Today we find ourselves at the other end of the spectrum.  Recently the yield on the 10-year Treasury note dropped below 2%, producing exceptional returns in an environment where inflation has been anemic.  Inflation, however, is showing signs of perking up and is well above 2%.  The Federal Reserve, furthermore, has aggressively expanded their balance sheet by monetizing the debt aggressively with their various "quantitative easing" programs.  Banks are flush with excess reserves that could see a dramatic flooding of the economy with money over the next several years, thereby further fueling the inflation that Chairman Bernanke so desperately seeks.

But investors are looking in the rear view mirror and sopping up Treasury notes at every auction. Beware the black swan.
Posted by Robert Wasilewski at 8:19 AM