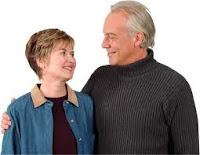 Quick: What percentage of couples make joint decisions on retirement savings?  According to a study by Fidelity Investments reported on in the September 2011 issue of AAII Journal, it is just 41%.

Furthermore, only 17% of couples feel that either spouse could assume responsibility for managing the assets. 35% of wives and 72% of husbands believe they could manage the assets.  37% of husbands say they are the primary decision maker on retirement assets and 8% of wives.

Fidelity recommends the following questions to remedy this lack of communication.  So, go to your honey, pour a couple of glasses of wine, and say "Babe, I've got some questions to go over with you."  It wouldn't be the worst way to spend a Friday evening.

Questions (my comments in bold)

1. At what age do we want to retire?  Yesterday is not acceptable. If you get past this one then...

2.  Do either of us want to work in retirement?  The questions are obviously inter-related and that's the beauty of them.  Working in retirement is one option to make up for a lack of sufficient funds (see question #5), etc.

3. What type of lifestyle do we envision in retirement?  Retirement specialists say that retirement should be towards something rather than away from something.  It is hard for the stressed-out worker with the long commute and the long hours to appreciate that, after a while, even vegging out gets unbearably boring; but it will happen.  You'll enjoy listening to the early morning radio report on the backup on 95 North because of last night's snow, but it'll get old after a while. Think through what you will do in retirement - you'll be glad you did.  This may change your answer to question 2.

4. Where do we want to live?  This can be a show stopper.  Couples sometimes are very surprised when this question is raised.  You didn't know that all along she was planning to move closer to her sister?  Oops!


5. What does our financial picture currently look like for retirement?  This can be painful (some people view this as akin to doing their taxes), I know, but this is where you start to discuss if you are on the right path - are you taking the right steps?  This is trickier than it looks.  Not long ago people said they would sell their house for a zillion dollars and downsize big time.  The downsizing is still feasible, but it has reached the point where people would rather open their financial statements than go on Zillow.

TO BE CONTINUED.
Posted by Robert Wasilewski at 8:14 AM