Is There a Financial Equivalent of the Darwin Awards? 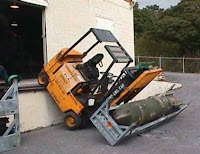 Death is a mostly a serious matter; but one can't help laughing at the Darwin Awards for people who have killed themselves doing crazy things and, in the process, lifted up the whole process of evolution. One of my favorites was the guy who went up on the roof and, for support, tied one end of a rope around his waist and the other end around his wife's car bumper. Mankind no longer has to worry about him having offspring.

These thoughts crossed my mind as I read the "Etc." column, titled "Why Ballers Go Bust," in the Bloomberg/BusinessWeek magazine for the week of October 17. The column reported that Scottie Pippen lost $120 million in bad investments, Antoine Walker filed for bankruptcy after making $120 million in his career, Mark Brunell lost millions in Florida real estate, Evander Holyfield blew more than $200 million, and the list goes on.

Here's my advice to multimillionaire athletes: take a measly $50 million and invest it in 30-year Treasury bonds at 3.89%, and get $1.9 million each year for the next 30 years. Next, sign up for my class in which I will teach how to live on $1.9 million/year. Then go out and piss away the balance by succumbing to greed and hair-brained schemes of your "friends" and advisors.

Actually, I shouldn't be so sarcastic since they are, in effect, taking over part of the function of what the government likes to do--which is redistribute income.
Posted by Robert Wasilewski at 3:09 PM