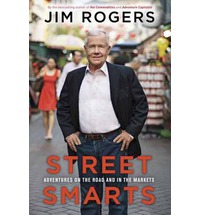 Take a self-made rich guy with strong views who has traveled the world and you've got a unique, interesting take on where things are headed.  A lot of people will tell you they've traveled the world. Most have been in and out of airports and with tour groups.  Like American officials who came back with glowing reports of the Soviet Union in the '50s, these travelers usually get either a distorted  or an incomplete view of the world economy.

Jim Rogers, after making a killing as co-manager of the Quantum Fund, has traveled the world by motorcycle and car.  Along the way, he learned a lot and developed strongly held views on global economics.  Rogers made his money by strongly backing long-term trends he discovered.  This carries into his personal life.  He has moved his family to Singapore to be at future center of global economics as well as to have his daughters learn Mandarin Chinese.  If you don't know much about Rogers, this could prove to be the most fascinating part of the book.

Probably the first thing, however, that comes to mind for most people at the mention of Jim Rogers is a smart investor who speaks his mind.  He has nothing to lose - there is no "party line" he has to stick to and this, alone, makes Street Smarts:  Adventures On the Road and in the Markets worth reading.

The book has a number of themes.  For example, Rogers talks about how to make a lot of money.  As readers of this blog know, I believe most investors should stick with low-cost index funds for the bulk of their assets.  If you must, confine your aggressive investing to less than 20% of assets.  Having said this, aggressive investors will find Rogers's investment advice worth thinking about.  He shuns diversification and encourages seeking opportunities where the investor has an edge.  He claims that everyone can, with a bit of thought, can come up with ideas.  I frankly am not sure of this.

He takes cars as an example.  You might know a lot about cars, and you might even get a great insight on where things are headed.  Cars may be your passion.  All of this sounds great as the basis of a potential large position.  Still, I claim it usually isn't that easy - you need to know financials and valuation and, most importantly, have the patience of Job.  There once was a story of an economist who tended to walk away muttering "It's more complicated than that" whenever he was presented with an idea.  I'm that economist in this situation.  It's sort of like Ted Williams explaining how it's easy hitting an 80-mile-per-hour slider.

Another Rogers theme is the erosion of the U.S. on the world stage as China moves up.  This, of course, is not original.  Still, given Rogers's on-the-ground travels, his views warrant serious consideration.  What caught my interest was his discussion of Plato's Republic and how the U.S. political system is flawed compared to the Chinese.  He emphasizes that China's government has been transformed from a non-functioning Communist bureaucracy to a capitalistic system that the Western world needs to appreciate as a formidable competitor.  He lauds the systematic buying-up of natural resources by the Chinese and their approach of making friends with Africa.  In the meantime, Rogers notes, the U.S. government is addicted to debt and ruled by K Street lobbyists.

Those interested in the American educational system as well as health care will find Rogers's diatribes interesting.

My complaint with Rogers is I feel he comes down too hard on diversification.  He says on p. 61 "But if you had diversified in 1970, and simply bought a stock average, you would have not have made much money at all in those thirty years."  Actually on 1/2/70, the Dow Jones Industrial Average stood at 800.  Thirty years later, it was at 10,787, for a 13.48 increase per dollar.  This doesn't include dividends!  Sounds like "much money" to me.

Still, this is a fun book and most readers will learn a lot from a smart guy.  It's not every day that you can get in the brain of a big-time successful hedge fund manager and see what makes him or her tick.


Posted by Robert Wasilewski at 10:53 AM