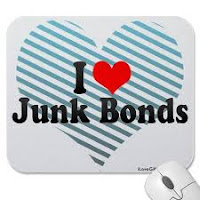 One of my favorite financial writers, a man with a sharp wit and ability to simplify complex investment topics, is John Waggoner at USA Today. Recently, he wrote a column Are junk bonds trash or treasure these days ?  that is loaded with facts useful for the DIY investor. Junk bonds, or as they are more politely called, high yield bonds, represent at least a small portion of most DIY investors' portfolios via exchange traded funds like HYG or JNK.

Here are some of the facts that I garnered from the article:

The first obvious take-away is that Waggoner's articles are flush with useful information.  Secondly, junk bonds are fairly attractive on a yield spread basis and on an expected default rate basis. Other things equal, a yield spread of +6.83% overcomes 4% default rate. Thirdly, this sector gets pounded in an economic downturn. Thus, if you are expecting the economy to weaken, lessen exposure. If the yield spread to Treasuries gets to less than +5.61%, again think of lightening up a bit - this is the point where you start to not being paid to take the risk. A final point to note is that, when investors get scared, nothing beats Treasuries, as shown by the performance numbers Waggoner reports.

I suggest that DIY investors interested in following markets read Waggoner's column. You may also want to check out his book Bailout.
Posted by Robert Wasilewski at 1:27 PM