He was 45 years old when he started and today he is 65 years old. How much was his portfolio  worth at year end 2010?

Data sources: Average Joe made the average wage during his career. This data was obtained at http://www.ssa.gov/oact/cola/awiseries.html . The market return data was taken from the "20 Year Periodic Table of Returns" produced by BlackRock. Here's the data and results: 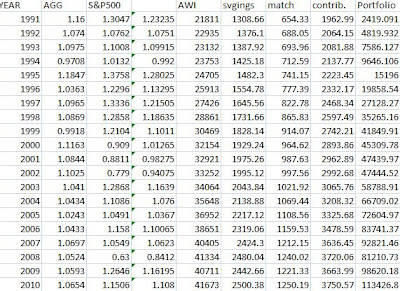 CLICK TABLE TO ENLARGE The table shows that an average person, continually making the average wage over his peak earning years, at a company that offered  basic retirement benefits, accumulated $113,000 using an extremely conservative investment approach. This despite waiting until he was 45 years old before he saved a dime.

It is not easy to understand sometimes why people constantly complain.  Suffice it to say that the human race has not always had it so easy and that billions would trade places today with Joe in the blink of an eye. And they wouldn't be stuck at an average wage for 20 years.
Posted by Robert Wasilewski at 10:37 AM