Future Crises Not Likely to be as Bad as 2008 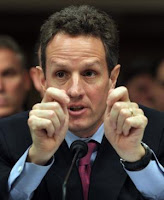 Treasury Secretary Geithner on Wednesday told Politico that, although there will be crises in the future, they won't be as bad as 2008.

On the other hand, it raises questions about the naivety of the Treasury Secretary. Does he not grasp the enormity of the Federal budget situation and the dysfunctionality of the U.S. political system. Has he ever asked himself what will happen if interest rates spike higher? Does he grasp the implications of a world where the leading economic power is communist and it is stealthily buying up natural resources around the globe? Does he not fully grasp that crises come in different forms?

His reasoning is that the regulators have the necessary authority from the Dodd–Frank Wall Street Reform and Consumer Protection Act to step in to nip a crisis in the bud.

But this isn't the way things generally work. Setting up a system to solve the last crisis doesn't prevent the next one. In the 1930s, FDIC was established to alleviate bank runs. Guess what? In 2008 we had potential bank runs in a different guise - runs on money market funds.

Treasury Secretary Geithner's demeanor and overall guidance on the debt limit situation could, in fact, set off the next crisis. His "oh well, we've reached the limit but I have tricks I can pull to keep the government running" is just forestalling the necessary increase.  It is giving unwarranted comfort to people that we have time to solve the problem.

Instead, he should be out front with names of people who will be fully responsible for setting up a flight from Treasuries if  it reaches that point. He should emphasize that the American people do not deserve to have the global financial system tested because of outsized political egos. He should be emphasizing that an interest rate spike is possible if we come to close to the point of default.

In 2006, Greenspan and Bernanke said the housing market weakness was not a serious macroeconomic problem. Today Treasury Secretary Geithner says future crises will be less bad.

I hope he's right!
Posted by Robert Wasilewski at 7:34 AM