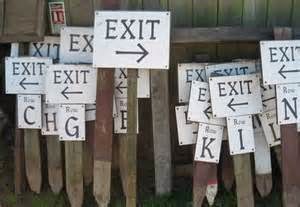 There is some buzz being created on the idea, apparently floated by the Federal Reserve, of establishing fees to exit bond funds with the purpose being to essentially deflate a potential bond market bubble.

I just watched an incomprehensible presentation on this topic by Rick Santelli on CNBC.

Look, this is a sad state of affairs.  Stupid ideas are the end game of price controls.  In tightly controlling the short term interest rates, the most important price in the economy, the Federal Open Market Committee has created a situation with serious pressures.

Take the most recent embarrassing presentation by Ms. Yellen.  After setting definitive objectives in terms of 2% inflation and 6% unemployment, now the FOMC says it's "noise" when the objectives, so clearly communicated to the financial markets, are exceeded.  What happens if the inflation measure they follow, the PCE deflator, goes above 2%?  It can be considered noise and, actually, the FOMC follows many indicators to assess inflation and unemployment.  Huh?

Ms. Yellen informed us that policy changes would be clearly communicated to financial markets, even in between FOMC meeting, via speeches, etc.  Is there anybody today questioning that Wall Street is running the show?

If she took a truth serum, she would tell us the problem is that the FOMC is worried that all hell will break loose when rate increases start because the market knows interest rates tend to go up and down over a protracted period.  That is, the market will see the first increase as the beginning of a longer term trend of rising rates.

The hope out there is that, if the Committee obfuscates long enough, the economy will jump ahead and stocks continue up so that it offsets the downturn in bond prices.  Good luck.

Volcker stopped the interest rate control approach and set the growth rate of the money supply. Thereby, through considerable pain, he broke the back of a vicious ramping-up of double digit inflation.  Now, thanks to the Greenspan, Bernake, and now Yellen FOMCs that believe they can forecast the economy and control the price of money, we are again backed into a corner and hence considering a stupid idea.  Again, the most likely outcome is that mainstreet will take it on the chin, especially the gray tsunami of baby boomer retirees.

As you follow this, keep in mind the confidently proclaimed 2005/2006 predictions by Greenspan/Bernanke, et al., that real estate markets are local and weren't a macro concern.  Keep in mind that Greenspan, referred to as the "maestro" by many of his FOMC colleagues, recommended that more first-time home buyers should take advantage of adjustable rate mortgages.  We know how that worked out.

Posted by Robert Wasilewski at 12:28 PM